Marijuana Evidence Excluded from Trial, Thanks to Science. 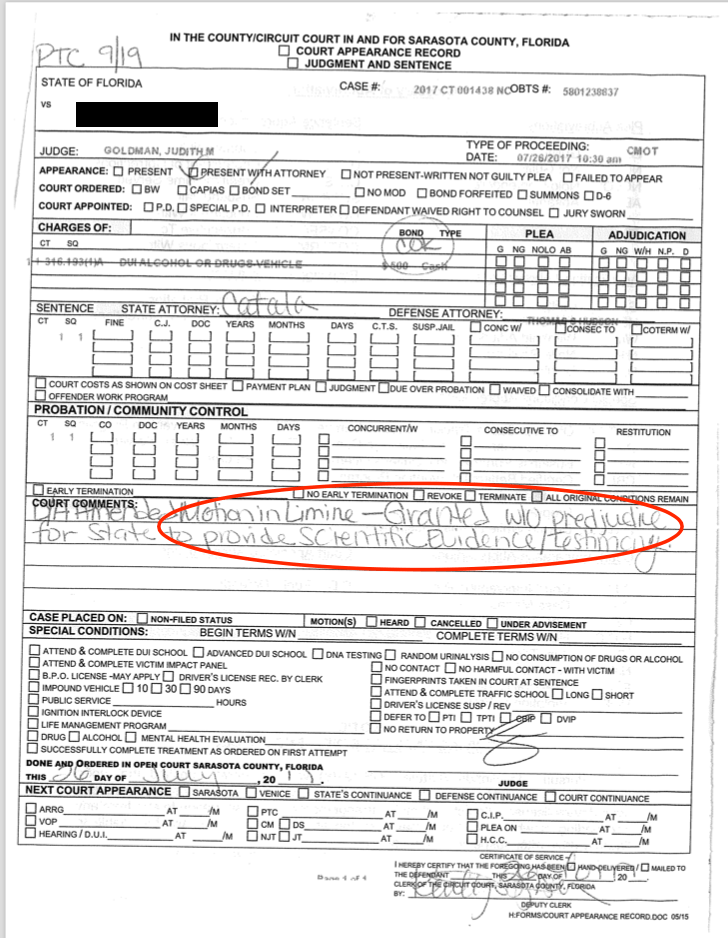 The Court Appearance Record Granting our Motion to Exclude Evidence.

We had a case in which our client was stopped because his tail lights were out in his rental car. His head lights were on. But his tail lights were out. (Not sure how that happens).  Anyway, the officer who stopped him asked him to step out of the car because he detected a slight smell of alcoholic beverage.  One thing led to another, and our client was arrested for DUI. He was returned to the Sarasota County Jail, where his breath test was .022, about one-quarter of the legal limit.  The officers were perplexed, and asked him to give a urine sample.

The urine sample was analyzed by the Florida Department of Law Enforcement, and the only thing they found was a second-generation metabolite of marijuana called "carboxy-THC."  (To learn more about carboxy THC, take a look at our article on the subject here.) Carboxy-THC isn't impairing, and its presence shows only that someone may have been exposed to marijuana within the last month.

Florida courts have made clear that testimony about a non-impairing by-product of marijuana has no "probative value" which would outweigh the "smear value" of labeling someone a pothead. For that reason, such evidence must be excluded in a DUI case. And this judge did the right thing, and ordered that the evidence could not be used against our client.