I am originally from Cleveland, Ohio. I attended a small college in Central Ohio called Kenyon College, which is fairly exclusive and well-known among literary types as a school primarily for English majors. I majored in political science and graduated in 1977 before attending Case Western Reserve University Law School, where I graduated in the top 10 percent of my class in 1980. During the six years that followed, I worked as a felony prosecutor in Cleveland, Ohio. I prosecuted cases involving drugs, rape, robbery, and burglary, as well as multiple homicide cases, several of which were death penalty cases.

I entered private practice in 1980, and by 1985 decided to take full-time work as a radio disc jockey at WHK Radio in Cleveland. In the mornings before work, I started developing my own practice, and in the evenings, I spent a lot of time doing remote broadcasts from clubs and bars. I left full-time radio in 1988 and went back to practicing law full time. In 1996, I moved to Florida with my family and opened a solo practice in Sarasota.

During the first few years at my solo practice, I took in every case I could in order to make a living. By 2000, I had become more selective. I began to focus on a part of the criminal law that would allow me to help real people: DUI law. I was drawn to the scientific and forensic nature of DUI law. In 2004, I restricted my practice to DUI cases only, attended many of the same classes police officers attend, and became certified to conduct DUI investigations and field sobriety tests. I then became certified by the National Highway Traffic Safety Administration as an instructor. Additionally, I became certified to do testing on the Intoxilyzer-5000 and Intoxilyzer-8000, which were the official breath test machines for the state of Florida in 2008.

I became board certified as a DUI defense lawyer, which requires a year-long process of studying for and eventually passing both a written and oral exam. Recertification is necessary every five years, and I have already been recertified twice. The process of recertification involves undergoing a background check and an evaluation by colleagues and judges. Approximately 90 percent of what I do is DUI defense. Since 2014, I've been on the faculty of the National College for DUI Defense, which is the organization through which the board conducts certification testing and educational seminars throughout the country. I have also taught sessions at Harvard Law School every summer since 2014. In July of 2019, I was a featured speaker at the summer session of the National College for DUI Defense. On average, I handle about 100 DUI cases per year, and over the course of my career, I have handled over 2,000 DUI cases.

What Do You Want Your Readers To Gain From Reading Your Book? 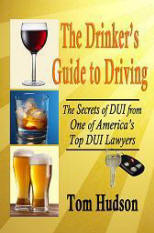 In 2013, I authored The Drinker's Guide to Driving: The Secrets of DUI from One of America's Leading DUI Lawyers with the aim of dispelling some of the myths and misapprehensions about DUI. There is an amazing number of myths and misunderstandings going around about DUI charges and alcohol in general, and the police and prosecutors take advantage of this by playing to the erroneous presuppositions of both judges and jurors in conducting DUI prosecutions. There's a lot of phony information out there and my goal is to bring it to light and increase the public's awareness of what is and isn't true.

This book is for anyone who has an interest in the subject of DUI law, or anyone who has a drink from time to time before getting behind the wheel of a car. Despite what many people think, a person doesn't have to regularly drink and drive in order to benefit from knowing exactly how much one drink affects them, how accurate the tests are, and how prejudiced the system is in favor of arrest and conviction.

For more information on DUI Defense Attorney Thomas Hudson, an initial consultation is your next best step. Get the information and legal answers you are seeking by calling (941) 219-5553 today.