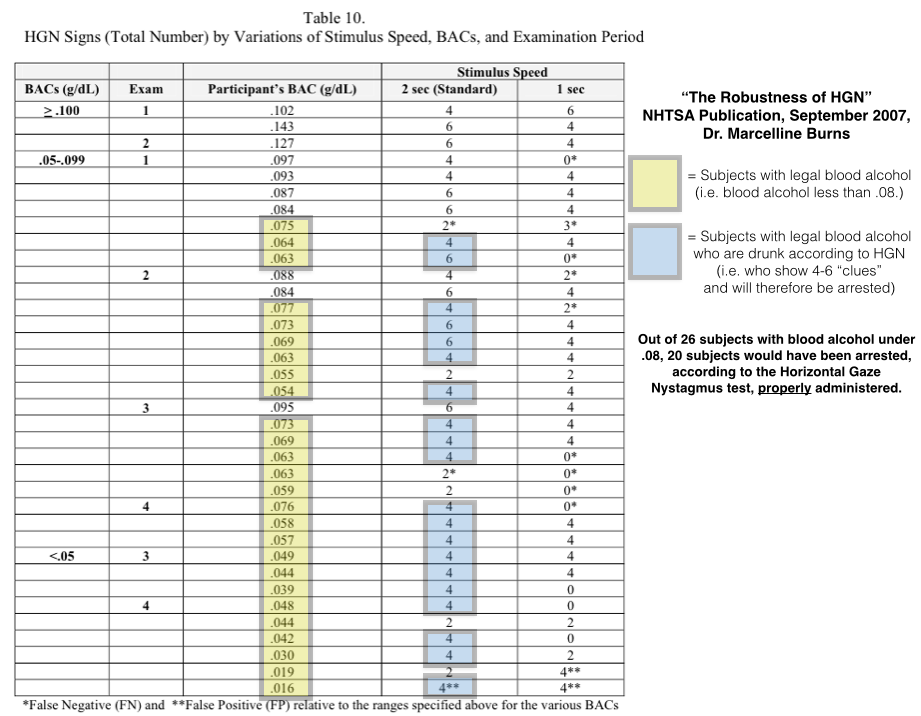 One of the problems with the Standardized Field Sobriety Tests used by police to assess sobriety in the field is that they are completely unscientific.  Real science requires transparency. Unfortunately, police agencies have never engaged in real science.

So when the National Highway Traffic Safety Administration decided in the 1970's to try to create some "scientific" field tests for alcohol impairment, they just made things up.

Normally, a scientific paper goes through a "peer review" process, in which it is blindly judged and critiqued by experts in the field before it can be published.  But since the government has its own printing presses, it merely published its own conclusions and claimed that it had "validated" them scientifically.

Real scientists were never able to review the raw data behind the various papers published by NHTSA, because NHTSA never released the data--until recently.

When NHTSA published a paper called "The Robustness of HGN" in 2007, they made the mistake of doing actual science.  That is, they published the raw data along with their conclusions.  And although the written paper draws the conclusion that the tests have scientific validity, the raw data show exactly the opposite. According to NHTSA's own data, 76% of people with blood alcohol levels below .08 would test "positive" for being OVER .08.  The test is designed for you to fail.

Let me spell this out in more detail.  According to the NHTSA Manual, used to train police, if a subject shows four or more "clues" in the Horizontal Gaze Nystagmus Test, it means his blood alcohol concentration (BAC) is over .08.  That is, he should be arrested.

But the data for the "Robustness" study show that 26 participants had BAC's under .08.  And of those 26 participants, 20 had four or six clues of nystagmus.  In other words, 76% of the people under the limit test over the limit.

That, by itself, is a reason NEVER to participate in field sobriety testing.