Your Marijuana DUI in Florida

From the looks of things, marijuana is going to be legalized in an increasing number of jurisdictions in the years ahead. And even where it's not legal, there are still a lot of people who relax with a joint now and then. That means there will be more cases of driving under the influence of marijuana. What does that mean?

For one thing, it means DUI lawyers will have to be familiar with more than just alcohol metabolism.  In the past few years, we've seen many DUI defendants whose cases were damaged because their lawyers did not know the biochemistry of marijuana.  Knowing how the body metabolizes THC is essential to defending cases of "stoned" driving. Sadly, many lawyers--even those regularly handling DUI cases, have simply not learned the biochemical facts of life about marijuana and driving.

Did you know that many forensic labs don't test for Delta 9-THC, the active ingredient in marijuana? It's true. Lab reports often show the presence of "Carboxy-delta 9-THC."

But Carboxy-THC is NOT THE SAME THING as Delta 9-THC.

It's a chemistry thing.

When marijuana is smoked, the active ingredient is Delta 9 THC. Within a couple of hours, the liver has converted that Delta 9 to something called Hydroxy-THC. Hydroxy-THC can also impair your driving. But it is rapidly converted to Carboxy-THC within another hour or two. The thing about Carboxy-THC is that it has no impairing effect on your ability to drive! So why do they test for it? Because it stays around in your system for hours, days or even weeks. But its presence says nothing about your ability to drive.

The chart below shows how Delta 9 THC is converted to Hydroxy-THC and then to Carboxy-THC: 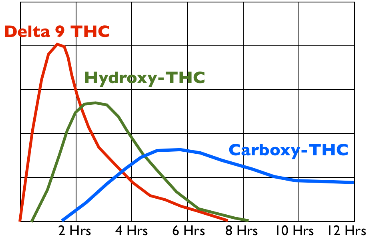 So if a citizen is charged with driving while high, but the lab finds only Carboxy-THC, it means that the driver WASNT impaired!  There are a lot of lawyers over the years who have allowed their clients to plead guilty just because they saw "THC" on the lab report and didn't realize that Carboxy-THC isn't the same as the stuff that gets you high.

In Florida, there is even case law which establishes that the presence of Carboxy-THC is not even admissible before the jury.  But many lawyers do not know that.

If you have a DUI case that involves marijuana, then you need to seek a lawyer who knows the chemistry.  And that's us.