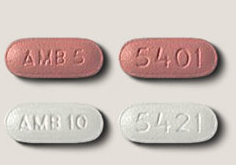 It was announced this morning that Kerry Kennedy, daughter of the late Sen. Robert F. Kennedy, was acquitted of the charge that she drove in New York State while under the influence of Ambien.  It was an interesting trial, because it was the rare DUI case where the defendant did not dispute that she was impaired, AND did not dispute that she was driving. Her defense was that she had accidentally taken an Ambien, thinking that it was her thyroid medication.

This was a tough case for the prosecutor, because the thyroid medication really did look like her generic Ambien. So it's no surprise that she was found not guilty.  The interesting thing is that it couldn't have happened at all in Florida.  That's because it's not illegal to drive in Florida while under the influence of Ambien.

Florida's DUI law states that there are three types of substances whose impairment will allow you to be charged with DUI:

Strangely, Ambien is not included in either of the latter two classifications.  Just by a legislative oversight, it is not illegal to drive in Florida while under the influence of this powerful sleeping medication.

I've handled perhaps a half dozen Ambien DUI cases in the past ten years, and every one of them was dismissed, once I pointed out the omission.  In most Ambien cases, the person didn't intend to drive anyway. Typically, the defendant was out at dinner, went home, took his medication and went to bed.  Later, he wakes up in jail.  The reason for this is that Ambien is well-known to cause sleepwalking.  Some Ambien patients have gotten out of bed and cooked full meals, and eaten them--while sound asleep.  Others have gotten in the car and driven long distances without incident.

Because Ambien is a powerful sleeping medication, and not one that gives a pleasant "high," it does not seem likely that we can expect a rash of sleep-driving cases in Florida.

But if it did happen, it wouldn't be a crime.