The Government Begins the Push to .05 Limits--With Junk Science

A recent study done by a professor at the University of California-San Diego is being touted as proof that the United States should reduce the legal alcohol limit for driving to 0.05.  The problem is-it is junk science.

The study published in the British journal Injury Prevention, purports to show that even the smallest detectable amounts of alcohol increase the risk of a fatal crash.  The author examined over half a million American crashes since 1994, and found that having a blood alcohol content (BAC) as low as 0.01 increases the likelihood of a driver being blamed for the wreck by 46%.

In addition, the study found no “threshold effect” – “no sudden transition from blameless to blamed” at the legal limit for drunk driving. Instead, the researchers concluded that blame increases steadily and smoothly from BAC 0.01to 0.24 percent. 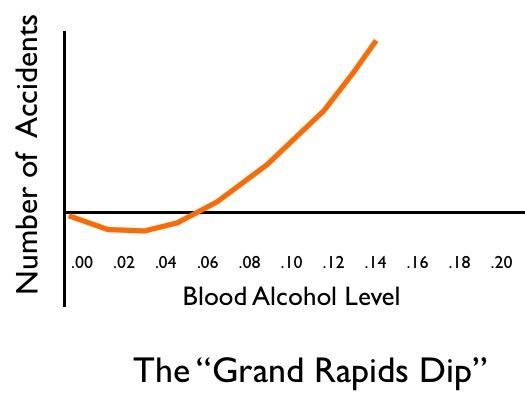 The first clue that this conclusion is suspect is that it goes against previous evidence that a minimal blood alcohol (between 0.01 and 0.04) actually DECREASES the risk of an accident.  The so-called "Grand Rapids Dip" has appeared repeatedly in large scale studies of traffic accidents, and clearly demonstrates that there is little effect on driving safety from low levels of alcohol. In fact, it appears that what small effect there is is from low levels of alcohol is positive.

However, the biggest clue to the questionable conclusions of the author is that it merely measures "blame"--which driver the law enforcement personnel "blamed" for the crash.  Now it is certainly the case that a large alcohol load will make an accident more likely.  A large-enough load will make an accident almost certain.  However, there has never been any objective research that shows that small amounts of alcohol create danger behind the wheel.

What this study demonstrates is the "confirmation bias" of law enforcement officers.  Given a close call on what caused a crash, the police are more likely to pin the blame on the driver with alcohol on his breath. That's something you have known for years, if you were paying attention.