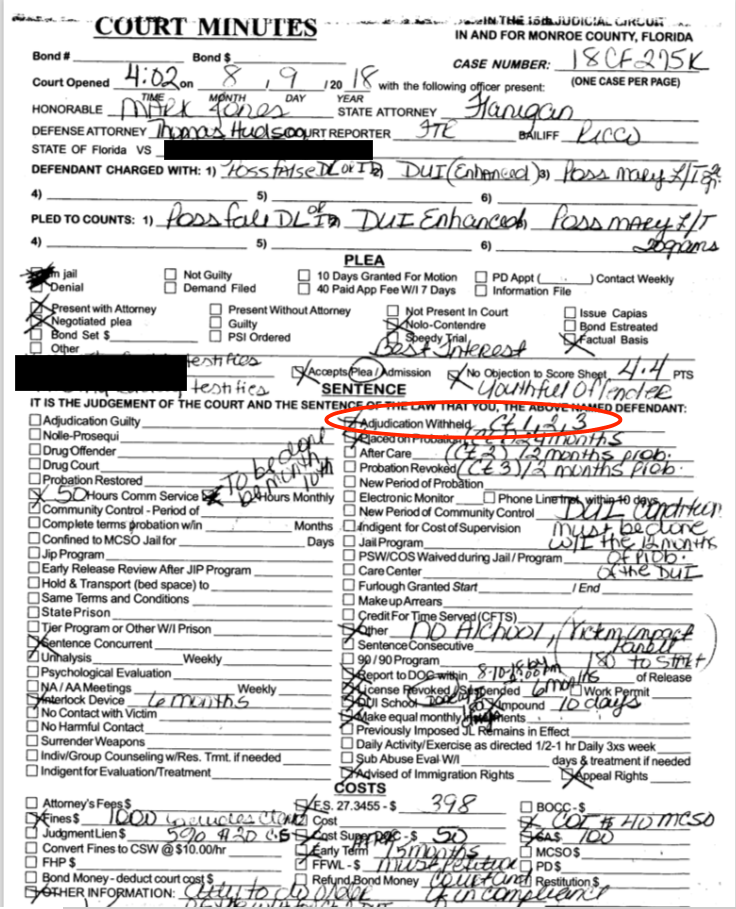 The Courts order withholding adjudication on all of our client's charges.

If you ask most Florida lawyers, they will tell you that an adjudication of guilt cannot be withheld on a DUI charge. For the most part, they are right.

There is a little-known provision in Florida's sentencing scheme, which says that if a person is over 18 at the time of the offense, and under 21 as of the date of sentencing, and has never been sentenced before, then the court can declare the person a "Youthful Offender." The normal mandatory adjudication rules for DUI cases don't apply. But this legal quirk only applies when someone pleads guilty to a FELONY, so most of the time, it doesn't happen in DUI cases, which are ordinarily misdemeanors.

In our case, our client was caught with a false ID, which was a felony. Despite the prosecutor's arguments, the court found that our client was eligible for treatment as a Youthful Offender on the misdemeanor DUI, because the client had tendered a plea to a felony of possessing a false drivers license.

This may seem a bit arcane, but it is important to our client. At age 19, the client will be applying for jobs and schools for a long time to come. And having a felony arrest on one's permanent record is a very serious matter. Getting adjudication withheld is the first step toward getting the case "sealed," so that it becomes invisible to anyone peering into your record.

At first, the judge thought that the Youthful Offender statute only applied to felony charges, but we were able to convince him that the statute permitted a withheld adjudication on our client's DUI case, as well. The hearing was tense and dramatic, but our client's family had tears in their eyes as we left the courtroom after the client had been sentenced with a withheld adjudication.